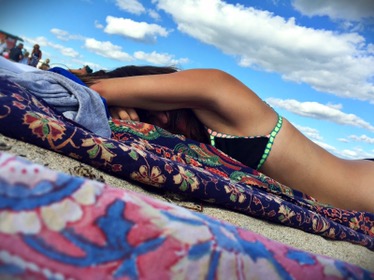 we say we don’t have seasons in miami, but we do. they are slight and they are lovely, and yesterday was our first fall day. the beach was windy and almost too cool, if not for the eager sunshine. lying on a thin blanket, my face hidden from stray drops of sea flying off the white caps through the wind, my toes hanging off the edge of the blanket digging happily in the warm, sun-baked sand, my soul reaching through the blanket and into the earth, thankful, for once, for change.
it is the best kind of beach day. it is the most serious we get around here. the reggaeton is drowned out by the waves pounding the sand and the party people picnic without overhearing. the change in the air is tangible. facing the roaring atlantic on a day like that with your eyes on the edge of the earth, and your body warmed by it, you feel grounded. it was a refreshing, glorious day that i was happy to spend with my dear friends, equally in need of a recharge.

happy fall everyone. may the cool air warm your soul. 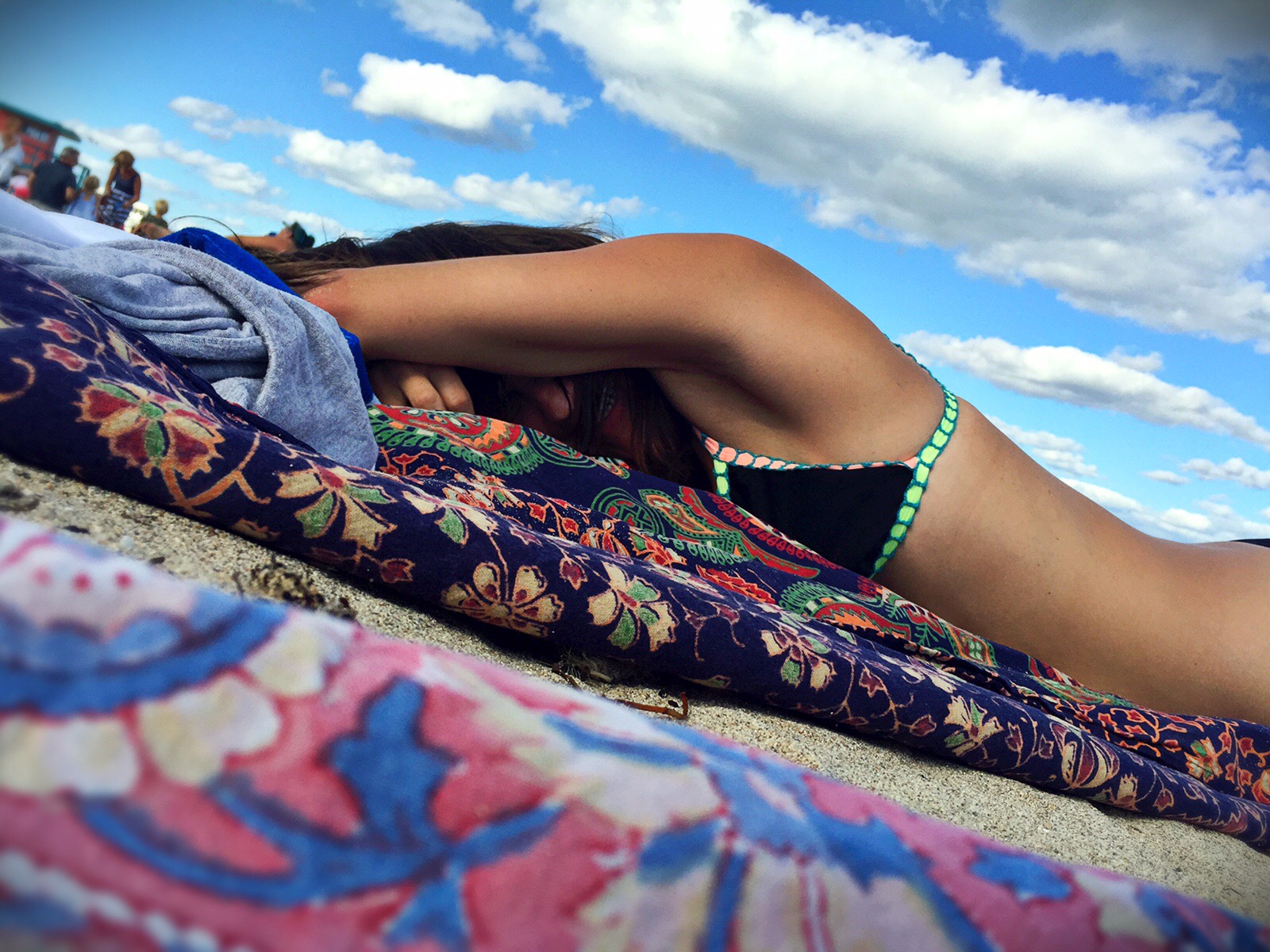 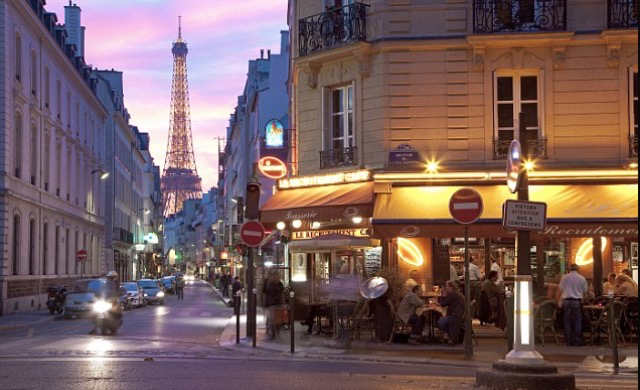 She sat staring at the cars driving by on the busy thoroughfare in front of the café, diagnosing what makes pretty people so mean. She’d been a hostess at the theater’s café for the 52 days since it had been open, and she could write a thesis on all the theater-going Miamians that she had come to encounter. It was a complicated trifecta of events: 1. a limited number of seats serving cooked-to-order food, 2. a fixed theater time to which no one could be late, and 3. no reservations. During the blissful moments when she sat outside and enjoyed her cappuccino each night after the show started, she outlined the thesis in her head.

The more the bling the meaner the women. This is especially true the older they are or the prettier.
A pretty young woman with more diamonds than fat content is likely to tell you how bad you are at your job, how horrible the establishment – that she’s been in for about 45 seconds – is run, and how dumb you specifically are. Make her wait for some avocado toast and a glass of malbec and you’d better steer clear, she’s looking to take people down hard and dirty.

Next, are the over-seventies. The men are quiet and polite most of the time. They look at you with the sad eyes carrying a lifetime of resignation. Those eyes paired with a blinged-out bluehair, that’s a code red. Abort. Once you engage, it’s going to be a lengthy, degrading conversation that will make you want to walk into on-coming traffic.

This is a grey area. You might get a nice guy who will happily settle for drinks at the bar. You might get a quiet type who evaluates the scene on his own and politely smiles as he leaves. More often than not though, they will be unable to understand why you can’t pull a table out of your back pocket for them, or a burger, or a Ferrari. The entitlement is startlingly limitless.

These people knowingly show up 15-30 minutes before the show, appalled that you don’t have something they can “grab.” When handed a glass of water, one straggler once said, “Well, fit it up all the way at least, I’m thirsty for crying out loud.” Because clearly, her thirst and untimeliness, are your fault, so just be gracious, this is America.

Part four, she thinks, relishing the last sip of her cappuccino, wherein I move to Paris and am perfectly, carelessly rude right back. 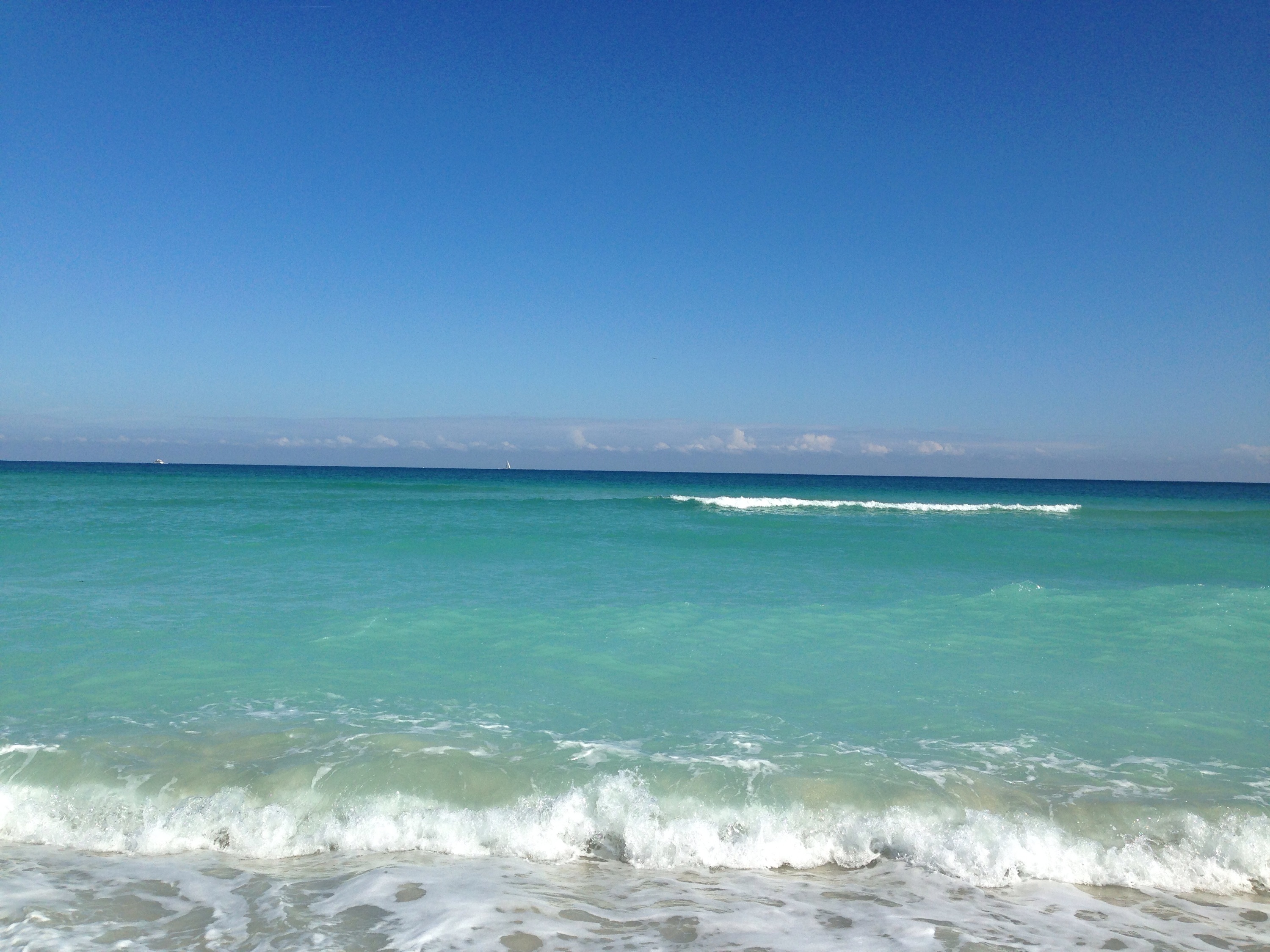 Across the sand
Bare feet
deep breath
dive in 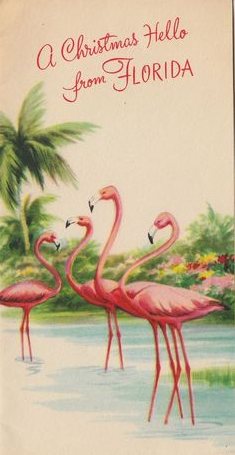 ‘Twas the night before Christmas, the ground floor of an old house
Had been converted into a piano bar, filled by many a louse.
Music and banter wound its way up the spiral staircase,
Melodies curled around a lady giving a sailor good chase.

Somewhere down some lane children slept in their beds
Visions of iPhone 6’s danced in their sweet heads
The avenue that divided the old house and the shore
Punctuated the season with lit palm trees and whores.

Headlights bound down A1A, his father’s Tesla he’d borrowed
High school sweethearts high on speed and dreams of the morrow
To the stars her eyes lifted through the open moon roof
It was then she saw a sled guided by many a hoof.

Slapping her beau frantically, she finally found her words,
“I saw Santa! That was Santa!” She said face towards
The sky, searching for more of what she had seen.
“That’s cute, Babe,” he said, and patted her knee.

“But,” she began, and knew it was useless.
I must’ve been seeing things, she resolved, quite hopeless
Back inside, the sailor was back at the bar
His date sipped champagne, flirting all the more.

The piano player banged out his version of Jingle Bell Rock,
A couple with more gumption than talent sang amuck.
No one heard the clatter that came from above,
Each patron was numbed by booze, lust or love.

They missed the sound of a sleigh landing with a crash.
Just one disbeliever had seen the flash
Too easily swayed was she from the magic,
“Can you believe it,” Santa huffed to his boys, “it’s just tragic.”

“Kids used to make it more difficult for us to fly about,”
“No one believes anymore, the stress is giving me the gout.”
At the piano the carolers had moved on to shots of whiskey,
Their song choices had slid from Christmas-themed to Bowie.

A third shot for his efforts sat atop the black polished grand.
As they counted down the Space Oddity, Santa’s bottom did land
On the floor of the chimney, soot splattered and rose
Landing softly on a couple necking, dotting her panty hose.

He brushed himself off and surveyed the room
More naughty than nice he suspected, still he pulled
Two presents from his sack, for the blokes behind the bar.
He couldn’t blame them for the rest, it was their house, after all

And while he happened to be in such an establishment,
He couldn’t resist the idea of just one little nip.
“Can you hear me, Major Tom” consumed the air;
Santa put back the shot that had been waiting there.

“Delicious,” he announced, his belly jiggling before him,
“George Dickel, good taste, maybe they are nice the lot of ‘em.”
With that he was off, more houses to tend to.
The singing finally ended, which brought their attention to

The empty glass sitting pretty right where they’d left it.
“Who took the third shot?!” lead carol singer called, indignant,
That someone would touch what was rightfully another’s
Unbeknownst to the lot, it’d been the ultimate gift-giver’s

Fair hand who had taken that nip of their bourbon
Santa took his seat, the reindeer launched the sleigh into mornin’.
Back in the Tesla’s she beamed, as she heard clear as day light,
“Merry Christmas to all, And to all a good night!” 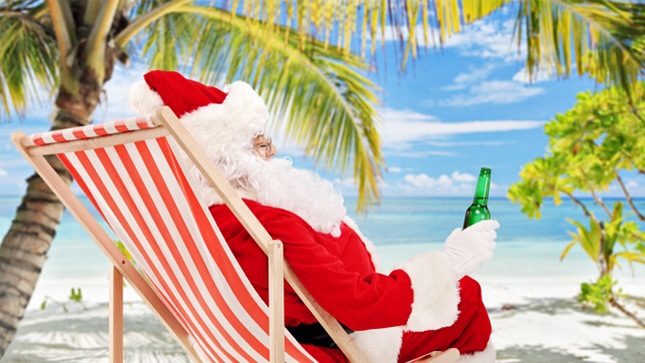 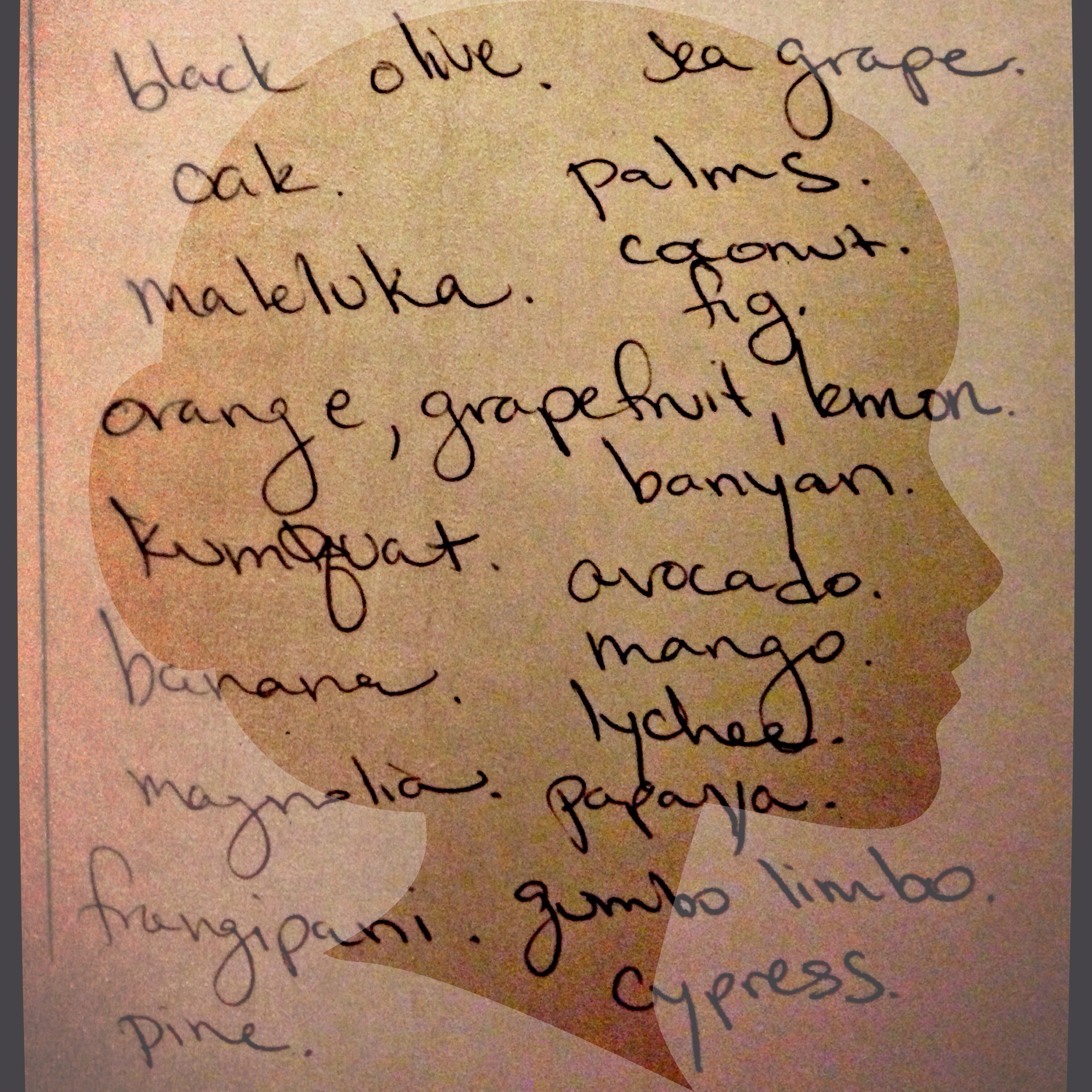 Tis the season
to gather round a tree
And celebrate bounty.
Sounds like all the years
of my childhood.
Where there never was
a white Christmas. 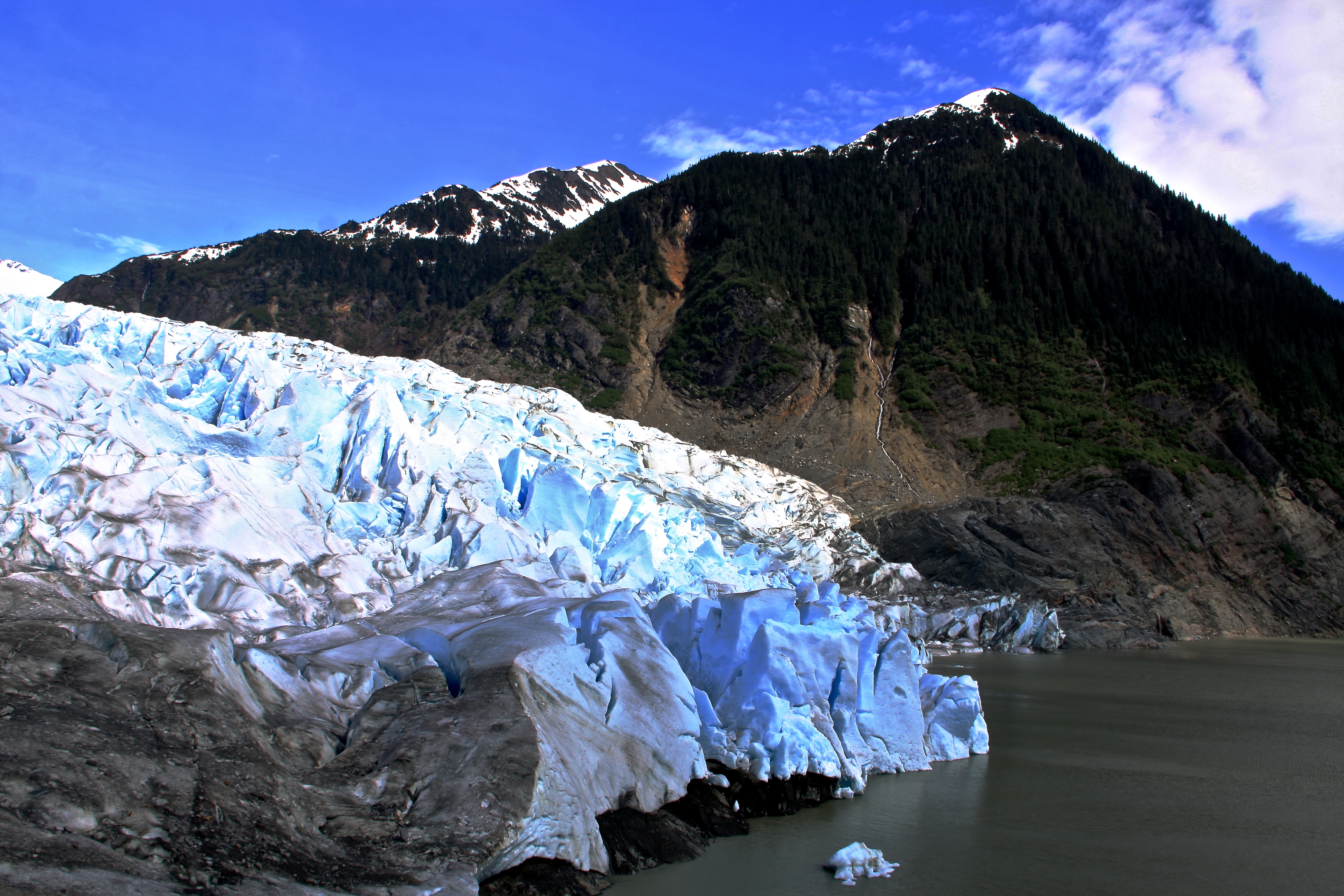 “Go,” Chris insisted to an audience that couldn’t hear him. His right hand fumbled blindly around the deep center console of his 1989 Bronco. It hit upon its target and he slipped a Marlboro Mild between his lips, pressed the old knob of the cigarette lighter in, and met the eyes of the woman in the car next to him briefly before she looked away. Chris shook his head. The woman’s eyes had glazed over like she didn’t know what she was doing in this world. In Alaska she would have smiled.

The knob popped out and with a familiar fluidity he touched the fiery orange coil to the tip of his cigarette, inhaled, removed the poisonous stick with his left hand and exhaled. He put the car lighter back in its place. The smoke was stagnant in the afternoon heat. It hung around him like the cars amassed in the Miami rush hour traffic.
END_OF_DOCUMENT_TOKEN_TO_BE_REPLACED 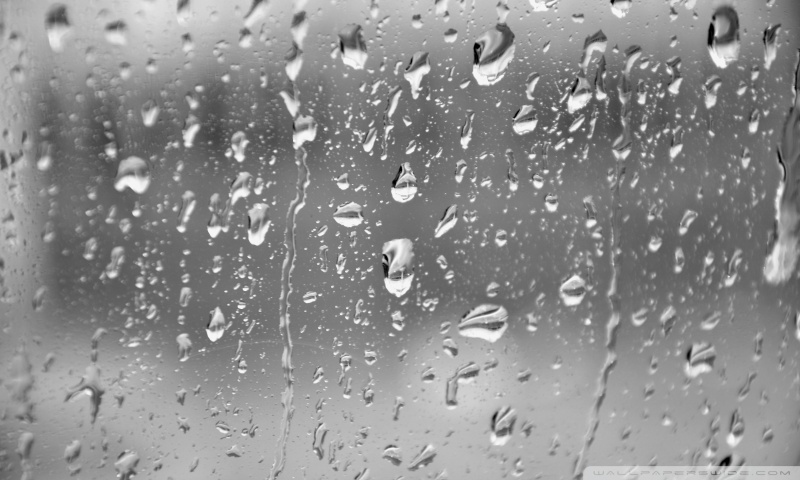 A fly’s wings fluttered against the glass as thunder shook the pane.

Drops pelted the roof of the car. The fly buzzed. Sam considered opening the window and letting him drown.

An ambulance siren howled in the distance. The rain masked the sounds of metal and rubber and the slick roads claiming its victims. The fly bobbled through space into the back seat.

Sam watched the rain fall on the windshield. The design reinvented itself with each drop. She hit the wipers and cleared the canvas. Her eyes found new patterns forming within the spots.

The leash that she called a cell phone rang. She resisted the temptation of throwing it out into the puddle beside her car.

The siren faded away. The humidity suffocated the fly. She answered the phone.